Salsa, which is just a fancy word for sauce (or, in fact, is the word for sauce in Spain and Italy) is a brilliant weapon for your weekly culinary arsenal. It’s fast and flexible (if you don’t have a bit of this, add a bit of that instead) and it can transform the most basic of starches and proteins with just a deft bit of chopping. This is one of my favourites. It’s from a book called Leith’s Latin American Cookery, written by Valeria V. Sisti and, although I sometimes make it as an accompaniment for grilled lamb or chicken, often on a hot evening I just make a big bowl of it and eat it with toasted pitta bread. It’s great for parties because you can just increase the amounts and, if you have leftovers, eat them for lunch the next day. In terms of ingredients, the recipe uses groundnut oil which I never have so I use sunflower (basically anything which doesn’t have too strong a flavour since it will be wiped out by the chilli) and you’re supposed to seed the tomatoes but I don’t bother.

How to
1. Juice the lime then make the dressing by combining it with the oil, vinegar and chilli powder in a large bowl. 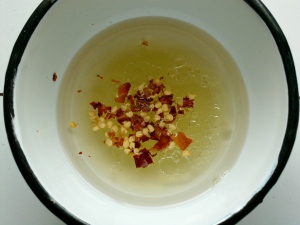 2. Add the tomatoes, avocados, peppers and spring onions, mix thoroughly, stir in the coriander and season to taste with hot chilli sauce, salt and pepper. If you leave it for a little while before eating, the flavour will improve. 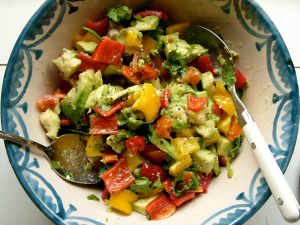 This entry was posted in Salsa and sauce recipes. Bookmark the permalink.