I don’t often share pudding recipes, probably because I don’t often make them. But what else is winter for, if not pudding? I have made this every month since October and, because winter has been quite rubbish (well, it has for me), I offer it to you as a little treat to get you through to the end of February.

It is such a simple pudding that you can make it even when your guests turn up an hour early, the main course hasn’t been started and you have never made it before…and everyone loves it. You can make it in advance too, and reheat it, but I have never been that organised (see previous sentence…). This recipe, from BBC Good Food, specifies making it in individual moulds but I just tip it into a square (24cm or so) tin, and then cut out large pieces for everyone. If you eat nothing else till the start of spring, you may be a tad undernourished but, my, you’ll be happy. 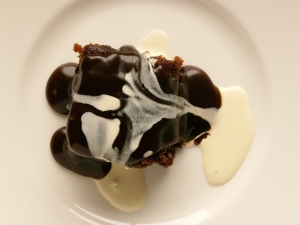 Pretty as well as delicious!

Cupboard (or things you may already have)
boiling water, 175g
self-raising flour, 175g, plus extra for flouring
bicarbonate of soda, 1 tsp
eggs, 2
softened butter, 135g (85g for the pudding, 50g for the sauce) plus extra for greasing
milk, 100ml
vanilla extract, 1 tsp

How to
1. Stone the dates if necessary, chop into small pieces and put in a bowl with the boiling water. Leave to soak for 30 minutes.

3. Butter and flour a square baking tin, or seven mini (each holding about 200ml) pudding tins and put to one side.

4. To make the pudding(s), mix the flour and bicarb together in a bowl, lightly beat the eggs in another bowl and leave both bowls to one side.

5. In a large bowl, beat 85g of butter with the demerara sugar until just about mixed together. You should end up with one big lump of sugary butter but it will still be grainy because the demerara won’t blend in completely.

6. Gradually, add the eggs to the sugary butter, beating in well after each bit. Next, beat in two tablespoons of the black treacle, then add a little of the flour, then a little of the milk, mixing in well each time, and continue until all the flour and milk have been used up.

7. Finally, beat the vanilla extract into the dates and mash them up a bit with a fork then add them (with all their liquid) to the rest of the mixture and stir in well. Tip into the prepared tin(s) and bake until risen and firm to the touch (about 20-25 minutes).

8. When the pudding is nearly ready, make the sauce: put the remaining butter (50g) into a saucepan with the muscovado sugar and half the double cream. Bring to the boil, stirring all the time, and cook until all the sugar has dissolved (this generally only takes a couple of minutes). Add the remaining treacle (1 tablespoon), let the mixture bubble for a couple of minutes more until you have a rich toffee-brown sauce then remove from the heat and stir in the rest of the cream.

9. Serve the pudding hot, drizzled with the sauce and, if you like (I do) with more double cream. If you want to make this in advance, my preferred option is to leave both puddings and sauce to cool, then reheat the puddings at 180°C/fan 160°C/gas 4 for 15-20 minutes, reheat the sauce separately then serve as above. (I have tried the recipe’s suggestion of storing the puddings with the sauce poured over then reheating both together, but find it all becomes a bit less lovely. But the details are here if you want to try it.)