How to feel rich for a quid: make cheese #1

Cheese, she says. I can hear the sighs from here. But cheese isn’t all the hard stuff, only produced by those wearing hairnets and plastic shoes. It can also be the likes of this labne, or ricotta, or paneer, soft cheeses that can be made with the minimum of equipment, fuss and expense. You need a little bit of space, and some muslin or a very clean tea towel because most require some form of dairy to be left to drain or sit for a few hours but, if I can make it in my one-metre-square alcove, then this is something anyone can do.

I first came across labne or labneh, also known as strained yogurt, or yogurt cheese, in an Ottolenghi recipe for shakshuka which is now one of my favourite things to eat for a weekend breakfast. And I was surprised and intrigued to realise it was so bloody easy and cheap: 500g of Greek yogurt will cost you, depending on where you shop (and as long as you don’t buy the Totally overpriced Total), between 60p and £1.20. Once you’ve made the basic recipe, you can store and use it in lots of ways.

As is, it works brilliantly as a spread for sandwiches and wraps and is a good replacement for soft goat’s cheese or cream cheese in bakes and dips; it will keep for a week or so in the fridge. If you want to keep it a little longer (though you still need to store it in the fridge), roll it into balls, then put them in a sterilised jar, cover in olive oil and add some flavourings. I like a chopped fresh red chilli, a peeled, slightly bashed clove of garlic, some herbs, a little coarse salt and some peppercorns. Like this, the labne will keep for a couple of weeks and it’s delicious on some of these flatbreads. I also recently discovered, via Claire Thomson in the Guardian, that you can cook with the liquid that drains away from the straining yogurt. It can be used to make those very flatbreads, which is the sort of neat, tying-up-all-the-ends-in-a-bow-thrift that I absolutely adore.

You will also need a sieve/colander suspended over a bowl plus some clean muslin or a clean tea-towel, large enough to line the sieve and wrap the labne.

How to
1. Line the sieve with the cloth.
2. Mix the yogurt and salt together then tip the mixture into the cloth. Fold the edges of the cloth over and tie the ends together to make a bundle.
3. Now put the whole lot, bundle in sieve in bowl, into the fridge and leave it to drain for 24 hours or so (you can also do this in a coolish kitchen in the winter). When you unwrap it you should have a mixture with a cream-cheese-esque consistency. Remove from the cloth and store in the fridge; it will keep for about a week. 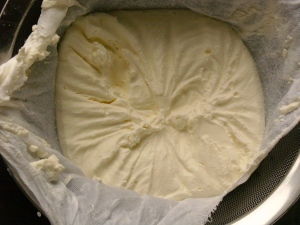 4. To make it last longer, or for a different effect, roll it into balls, put them into a sterilised jar, cover with olive oil, then add whatever flavourings you like: spices, fresh herbs, garlic, chilli and citrus zest are all good. Store in the fridge. 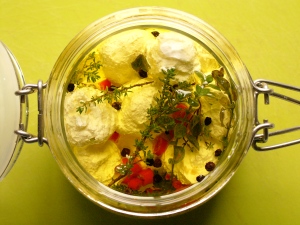 This entry was posted in How to feel rich for a quid and tagged cheese recipes, Claire Thomson, Guardian, labne, ottolenghi, vegetarian recipes. Bookmark the permalink.

4 Responses to How to feel rich for a quid: make cheese #1