How to feel rich for a quid: make cheese #2 and palak paneer

If labne‘s not your thing, or you want something a little more sturdy that you can cook with, then perhaps try making paneer. Common to south-east Asia, it’s a cheese that is difficult to buy yet really easy to make. Easy and really really cheap. And if you’re a fan of spicy food, it a great ingredient to have to hand, since it both has a lovely fresh taste of its own but goes brilliantly with all forms of spice. It is also really storecupboard-friendly: you need whole milk and acid (lemon juice is good, but vinegar works too), plus a means of straining it. That’s it. Unlike labne, it sets very quickly so you can have it ready in a couple of hours. The recipe is below and it’s one that is very much saved into the hard drive of my mind.

Once you’ve made it, I highly recommend using it in this fantastic spinach and tomato with paneer dish, from Meera Sodha’s Made in India. Saag paneer, as she points out, is a curry-house stalwart but this is much fresher (I’ve always wondered how some restaurants cook spinach, since it often seems to have lost every trace of green…) and, even if you don’t have the paneer, the combination of vegetables and spices is delicious and a perfect backdrop for some simply baked or steamed fish. And if you want further paneer inspiration, I highly recommend Sanjana’s fantastic blog Korasoi, where you will find endless delights; paneer butter masala for me next…

NB You have to use whole milk, not anything skimmed, since the fat in the milk makes the cheese…

You will also need a sieve or colander, lined with muslin or a clean tea towel, suspended over a large bowl.

How to
1. Put the milk into a large saucepan and bring to the boil, stirring all the time to stop it from catching on the bottom.
2. As soon as it starts to boil, turn down the heat, pour in the lemon juice or vinegar and stir gently. The curds and whey will separate and, as soon as they do, remove the pan from the heat. If the milk doesn’t react to the juice/vinegar, add a little more.
3. Tip the mixture into the lined sieve over a bowl to catch the curds in the sieve and the whey in the bowl. (At this point, you can either discard the whey or, as I do, use it to make this bread. Whey and acid, as Dan Lepard points out in Short and Sweet both speed up the rise and soften the crumb; you’ll find 12 hours is probably enough for the rise if you use the whey.)
4. Lift the sieve out of the bowl and rinse the curds under running water to remove any trace of the acid. Now suspend the sieve again, tightly wrap the cheese in the muslin and squeeze to remove more liquid.
5. Put a weight on top of the muslin-wrapped paneer and leave until firm. 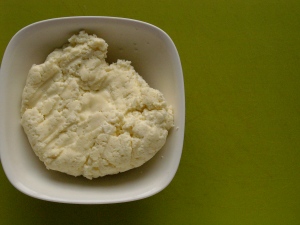 Some say this takes 30 minutes, others a couple of hours; it will depend on your milk, the temperature, the acid you used. Once firm, store wrapped in cling film or in an airtight container for up to 3 or 4 days. Or don’t store it and make the wonder below.

Makes enough for 2 as a light meal/side

Cupboard (or things you may already have)
onion
garlic cloves, 3
rapeseed oil (or sunflower/light olive, if that’s all you have, just not some expensive extra virgin oil)
salt
tomato purée, ½ tbsp

How to
1. First, thoroughly wash and drain the spinach. Then peel and finely chop the onion, garlic and ginger, chop the chilli and halve the tomatoes.
2. Cut the paneer into even-ish size pieces (the recipe says cubes, but my paneer always comes out as a flat disc…) and season with a little salt.
3. Put 1½ tablespoons of oil into a lidded frying pan over a high heat then add the paneer cubes. Cook, turning frequently, until golden on all sides. Be careful because a) the oil might spit when you add the cheese (half-cover with the lid if it does) and b) the paneer might catch so keep an eye on it. Remove the cubes onto kitchen paper once done.
4. Turn the heat down, remove any scraps or crumbs from the pan and, if there is not much oil left, add another splash. Then add the chopped onion and a pinch of salt and cook until soft and golden.
5. When the onions are ready, add the garlic, ginger and chilli, stir in well then add the tomato purée and tomatoes. Cover and cook for about 6-8 minutes until the tomatoes begin to break down.
6. Add the spices, a pinch of salt, stir in and cook for another couple of minutes. It should now look like a paste, with very little liquid left. Replace the lid and cook a little longer to get rid of any remaining liquid if necessary.
7. Season with a little more salt to taste, again only if necessary, then return the paneer to the pan and stir to cover with the tomato paste.
8. Finally, add the drained spinach in handfuls, stir in gently then cover and cook until wilted. Add the rest of the spinach in the same way, stirring it in every time to cover it with the sauce, then serve.

This entry was posted in How to feel rich for a quid, Vegetarian recipes and tagged Dan Lepard, Korasoi, Meera Sodha, one-pot, paneer. Bookmark the permalink.

2 Responses to How to feel rich for a quid: make cheese #2 and palak paneer